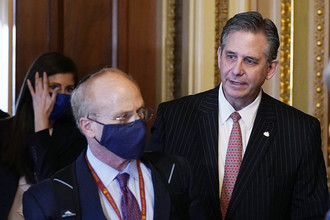 Trump was quite displeased with his impeachment defense team
By Gabby Orr, Meridith McGraw
POLITICO
February 10, 2021
For former President Donald Trump, the opening day of his second impeachment trial did not go as planned or to his liking.

Cocooned at his Mar-a-Lago estate, Trump watched as his defense attorneys responded to an emotional presentation by House impeachment managers with a series of dry, technical and at times meandering arguments about due process and the constitutionality of the proceedings. As they droned on, he grew increasingly frustrated with the sharp contrast between their muted response and the prosecution's opening salvo, according to two people familiar with his thinking.

"President Trump was not happy with the performance of his legal team in action," said one of the people familiar with his thinking.