Klayman: Time for Coach K to Hang It Up: He Can't Even Win With "One & Done" Non-Student Ringers! God's Will for His Destroying Duke's Academic Integrity! 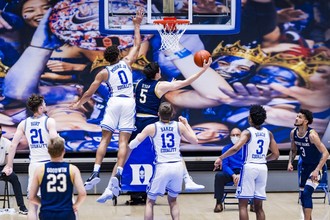 Duke men's basketball drops 3rd consecutive game in offensive shootout with Notre Dame
The Chronicle
February 10, 2021
In a game in which empty possessions would not be tolerated, Notre Dame's offense simply outplayed Duke's.

Despite an offensive barrage from the Blue Devils, their defense couldn't find a groove, falling 93-89 to Notre Dame Tuesday evening in Cameron Indoor Stadium.

"Tough loss. Mike [Brey]'s been on such a roll offensively these last couple weeks. They're really tough to defend, and then [Cormac] Ryan had a sensational first half," head coach Mike Krzyzewski said. "And saying that, I thought it was one of the best offensive games we've played."