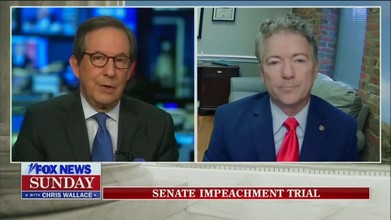 Chris Wallace Pokes Holes in Rand Paul's Impeachment Defense
By Justin Baragona
The Daily Beast
February 8, 2021
Fox News anchor Chris Wallace confronted Sen. Rand Paul (R-KY) over his assertion that it's unconstitutional to impeach former President Donald Trump, pointing out on Sunday that there is precedent for impeaching an official who's left office.

During an interview with the Kentucky senator on Fox News Sunday, Wallace first pressed the Republican lawmaker over the growing conservative talking point that Democrats have used heated rhetoric in the past so the former president should get a pass for inciting an insurrectionist riot.