Klayman: Charles Cooper Is Probably Upset Trump Never Gave Him a Post in His Administration as Well as Sucking Up to Establishment Republicans for Referral Legal Business! Typical Swamp!
Order "It Takes a Revolution: Forget the Scandal Industry!" at Amazon.com 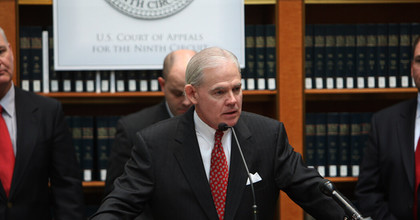 In an opinion piece posted on The Wall Street Journal's website, the lawyer, Charles J. Cooper, who is closely allied with top Republicans in Congress, dismissed as illogical the claim that it is unconstitutional to hold an impeachment trial for a former president. The piece came two days before the Senate was set to start the proceeding, in which Mr. Trump is charged with "incitement of insurrection" in connection with the deadly assault on the Capitol by his supporters on Jan. 6.

Since the rampage, Republicans have made little effort to excuse Mr. Trump's conduct, but have coalesced behind the legal argument about constitutionality as their rationale for why he should not be tried, much less convicted. Their theory is that because the Constitution's penalty for an impeachment conviction is removal from office, it was never intended to apply to a former president, who is no longer in office.