Klayman: "Bribed by Beijing Biden" Does Bidding of ChiCom Politiboro!
Order "It Takes a Revolution: Forget the Scandal Industry!" at Amazon.com 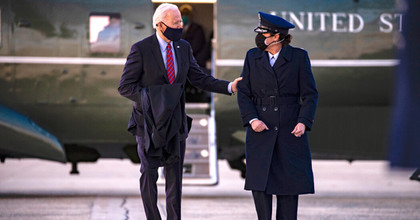 Biden Bars Trump From Receiving Intelligence Briefings, Citing 'Erratic Behavior'
By David E. Sanger
New York Times
February 6, 2021
WASHINGTON — President Biden said on Friday that he would bar his predecessor, Donald J. Trump, from receiving intelligence briefings traditionally given to former presidents, saying that Mr. Trump could not be trusted because of his "erratic behavior" even before the Jan. 6 attack on the Capitol.

The move was the first time that a former president had been cut out of the briefings, which are provided partly as a courtesy and partly for the moments when a sitting president reaches out for advice. Currently, the briefings are offered on a regular basis to Jimmy Carter, Bill Clinton, George W. Bush and Barack Obama.

Mr. Biden, speaking to Norah O'Donnell of CBS News, said Mr. Trump's behavior worried him "unrelated to the insurrection" that gave rise to the second impeachment of Mr. Trump.