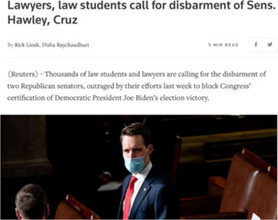 The radical, oppressive Left is not relegated to college campuses, the media, or Congress. They have no boundaries and have like snakes, slivered their way into corporate America, sports leagues, universities, banks, and professional institutions that can silence conservatives far worse than a Silicon Valley tech conglomerate.

The most recent example stems from the District of Columbia Bar's disciplinary arm, a radical far-left organization that is using its influence to silence and destroy conservative lawyers who would defend President Trump or any citizen who is maligned by big government or big tech. It is no surprise that its leadership are donors to Joe Biden, Hillary Clinton, Barack Obama, and other leftist Democrats!

In the past, I was one of their targets, but today, their members are trying to disbar anyone who defended or even supported President Trump — Senator Ted Cruz, Senator Josh Hawley, Rudy Giuliani, Kellyanne Conway, among others.

They are leftist bullies— and here is how they work: anyone who represents conservative interests can receive a threat of disbarment—the worse punishment a lawyer could receive. The threat alone is enough to make many lawyers, and especially law firms, much less likely to advocate for conservative clients, thereby silencing YOUR voice.

Freedom Watch is fighting the Left's cancel culture by standing up to the D.C. Bar. We need your immediate help so conservative lawyers will never fear retribution from these oppressive leftists for merely advocating for their clients.

The vile and despicable leftists that control the D.C. Bar's disciplinary apparatus see people like Josh Hawley and Ted Cruz, both former Supreme Court Law Clerks and now U.S. Senators, as troublemakers against leftist causes and want to exert their influence to silence them. Quite frankly, they see conservative lawyers standing up for the average citizen, exposing the truth, and that scares their comrades in the Biden Administration.

The D.C. Bar's disciplinary apparatus has a proven history of targeting anyone who stands against their far-left politics and protects those who support their agenda.
People like Tigar are sitting in judgment of conservative pro-Trump lawyers at the D.C. Bar. That's why Freedom Watch needs your help to cancel its influence over the most powerful bar association in America.

My name is Larry Klayman, and I am the Chairman of Freedom Watch. I fight for all Americans' rights, and I need your help to continue our mission to ensure conservative voices receive proper advocacy in our courts.

The DC Bar threatens to take the law license and livelihood of lawyers who oppose their leftist doctrine, and that is how the Left will cancel your voice going forward unless we have the resources to fight back.

When Big Tech, or an out-of-control Congress, and radical leftists threaten your rights, few lawyers will be willing to stand up for you—that's where Freedom Watch shines our light.

Just last month, I sued Amazon, Google, and Facebook for shutting Parler down. I am also representing Laura Loomer in her Supreme Court case against Big Tech. In the past, I took on the Clintons, the Obamas, and even the National Security Agency for secretly surveilling American citizens.

Freedom Watch is in the courts is fighting for you to shine a light on these injustices and to preserve freedom. We need you to stand with us. Can we count on you today?