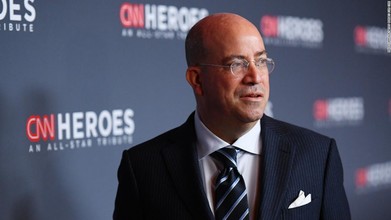 Jeff Zucker announces he will stay on at CNN through the end of the year
By Brian Stelter, CNN Business
CNN
February 4, 2021
New York (CNN Business)A question consumed CNN employees recently: Was the company's president, Jeff Zucker, going to leave after the presidential inauguration?

Zucker came quite close to exiting, according to associates, but decided to stay on. He told employees on Thursday morning that he will remain with CNN's parent, WarnerMedia, through the end of the year.

"The truth is, back in November and December I had basically decided that it was time to move on now," Zucker said on the company's daily editorial call. "But since then I've had a change of heart. And I want to stay. Not forever, but for another year. And I feel really good about this decision."