Klayman: Newsmax Reveals Its True Face: Its CEO Ruddy Gave 1 Million Dollars to the Clinton Foundation!
Go to www.FreedomWatchUSA.org to Join and Support Our Leftist Media Strike Force! Order "It Takes a Revolution!" at Amazon.com 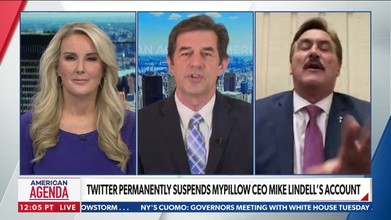 Newsmax Anchor Begs Producers to 'Get Out' of Trainwreck Mike Lindell Interview
By Justin Baragona
The Daily Beast
February 3, 2021
A Newsmax interview with conspiracy-peddling MyPillow CEO Mike Lindell went completely off the rails on Tuesday when Lindell immediately began pushing baseless and debunked claims about Dominion Voting Systems, prompting anchor Bob Sellers and Heather Childers to repeatedly cut him off and Sellers to literally walk off the set.

Lindell ostensibly appeared on the pro-Trump conservative network to discuss Twitter's decision to permanently kick him off its platform for spreading election conspiracies. Earlier this week, Twitter also suspended his company's account after Lindell tried to use it to get around his ban.