Klayman: Low Class Anti-Christian Bigots of SNL!
Go to www.FreedomWatchUSA.org to Join and Support Our Leftist Media Strike Force! Order "It Takes a Revolution!" at Amazon.com 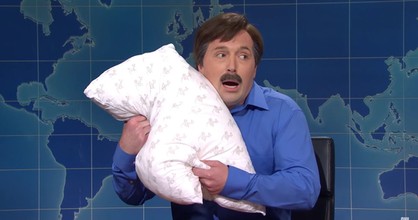 SNL Reveals Where the MyPillow Guy Gets All His Amazing Ideas
By Halle Kiefer
Vulture
February 1, 2021
Turns out, inventing the pillow is a pretty lucrative gig. At least, that's what we think MyPillow founder and CEO Mike Lindell did, seeing as how he became an inner-circle confidante of former president Donald Trump and a key figure in Trump's attempt to overturn the results of the 2020 presidential election. So it makes sense that Saturday Night Live would have Lindell (played by Beck Bennett) stop by "Weekend Update" to reveal where he's been getting all his phenomenal ideas, including the inspiration to blame Dominion Voting Systems for Biden's win or Antifa for the Trump supporters storming the Capitol. It turns out, he gets them from ... his pillow.