Trump Throws in the Towel and Embraces GOP Establishment
Larry Klayman on battling the left: 'We the People are now on our own' 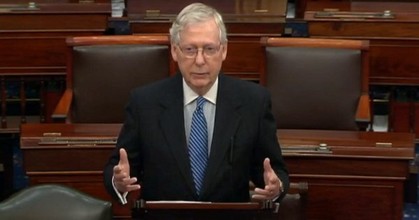 By Larry Klayman
WND
January 29, 2021
Over the last many weeks, until Thursday, our President Donald Trump (I do not recognize Joe Biden as the commander in chief given his having obtained the office of president through fraud), has been vilifying the establishment wing of the now politically dead Republican Party, for them having thrown him under the bus in his fight to retain the White House. Indeed, the two Republican "leaders" in Congress, now Minority Leader Mitch McConnell in the Senate and Minority Leader Kevin McCarthy in the House of Representatives, both condemned Trump for allegedly inciting violence at the Capitol three weeks ago last Wednesday — and in the case of the despicable McConnell, he even entertained the option of impeaching and convicting The Donald for alleged "high crimes and misdemeanors."