Klayman: This Obama Appointed Federal Chief Judge Is a Politicized Hack! Judge Howell Is Discussed in My New Book "It Takes a Revolution!" Order at Amazon.Com 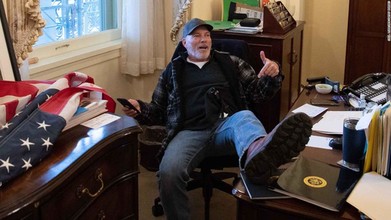 Chief federal judge in DC scorches Capitol riot suspects
By Katelyn Polantz
CNN
January 29, 2021
(CNN)The chief judge of the federal court in Washington scorched Capitol riot suspects during a hearing on Thursday, calling their actions an assault on American democracy and ruling that a man who had bragged about putting his feet on a desk in House Speaker Nancy Pelosi's office should stay in jail as he awaits trial.

"This was not a peaceful protest. Hundreds of people came to Washington, DC, to disrupt the peaceful transfer of power," Chief Judge Beryl Howell of the DC District Court said in the hourlong hearing for Capitol riot defendant Richard Barnett on Thursday.

Howell's remarks are some of the first from a federal district judge over the more than 150 criminal cases that resulted from the siege. Her decision on Barnett also marks the first ruling in an appeal from the Justice Department after a magistrate judge out of Washington denied its request to keep a Capitol riot suspect in jail. At least four others are awaiting rulings from district judges in Washington after appeals.