Klayman: The Marxist Self Hating Jewish Left Is a Threat Not Just to the U.S. And Israel but All Jews! Raskin Along With Senators Schumer, Blumenthal, Sanders and Representatives Raskin, Nadler, Schiff and Engel Are a Disgrace to the Great Majority of Jews!
Order "It Takes a Revolution: Forget the Scandal Industry!" at Amazon.com 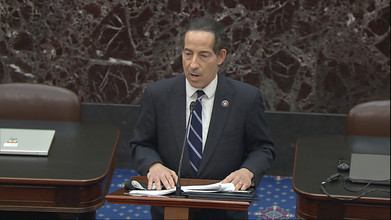 Amid Grief, Rep. Jamie Raskin Leads Trump Impeachment Effort In Senate
NPR.org
January 27, 2021
Maryland Democrat Jamie Raskin is preparing to lead the second Senate trial of Donald Trump with two clear arguments in mind: Trump was responsible for the attack on the Capitol on Jan. 6, and the Constitution allows Congress to hold the former president accountable through impeachment.

Raskin, a former constitutional law professor, is preparing to make that case to a Senate where 45 of 50 Republicans voted Tuesday to reject the second part of his argument. Democrats have always faced an uphill battle to persuade the Senate to convict Trump and move on to a vote to bar him from federal office, but Raskin says he has to try anyway.