Klayman: More Proof the Republican Party Is Dead!
Order "It Takes a Revolution: Forget the Scandal Industry!" at Amazon.com 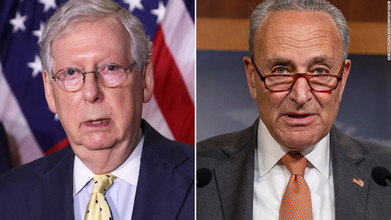 McConnell allows Senate power-sharing deal to advance after fight with Democrats over filibuster
By Manu Raju and Ted Barrett
CNN
January 26, 2021
(CNN)Senate Minority Leader Mitch McConnell announced Monday that he will allow the 50-50 Senate to officially organize so Democrats can take control of key committees in the chamber after a weeklong battle with Senate Majority Leader Chuck Schumer over the rights of the minority to stall legislation.

The breakthrough came as GOP leaders were eagerly looking for a way out of a potential crisis that would have stymied the Senate committee process indefinitely, after McConnell pointed to recent comments made by two Democratic senators about their long-standing opposition to gutting the filibuster as sufficient to ease his concerns.

Schumer for days had rejected the GOP leader's demands, saying Monday afternoon: "We are not letting McConnell dictate how the Senate operates."