Klayman: Coach K Is "One and Done!" Time to Retire! 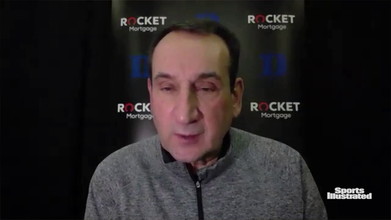 Watch: Coach K Takes Issue With Student Reporter's Question
By Shawn Krest
Sports Illustrated Duke Blue Devils News, Analysis and More
January 24, 2021
Duke lost its third straight game on Saturday, falling at Louisville, 70-65, to drop to 5-5 on the season—its worst start in more than 35 years. The game was close throughout, and Duke missed three potential go-ahead or game-tying shots in the final minute.

That led to an awkward moment with the media immediately afterward.

During coach Mike Krzyzewski's postgame press conference, a student reporter from Duke's newspaper, The Chronicle, asked Coach K a question, resulting in an exchange between the two.