Klayman: Police Have Had Enough of Being Persecuted, Attacked, Maimed and Killed by the Left and Its Communist Infiltrated Groups Like Black Lives Matter!
Order "It Takes a Revolution: Forget the Scandal Industry!" at Amazon.com 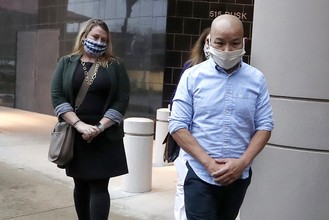 US police weigh officer discipline after rally, Capitol riot
AP NEWS
January 24, 2021
For two Virginia police officers who posed for a photo during the deadly U.S. Capitol insurrection, the reckoning has been swift and public: They were identified, charged with crimes and arrested.

But for five Seattle officers the outcome is less clear. Their identities still secret, two are on leave and three continue to work while a police watchdog investigates whether their actions in the nation's capital on Jan. 6 crossed the line from protected political speech to lawbreaking.

The contrasting cases highlight the dilemma faced by police departments nationwide as they review the behavior of dozens of officers who were in Washington the day of the riot by supporters of President Donald Trump. Officials and experts agree that officers who were involved in the melee should be fired and charged for their role.

See also: Left out to kill all opposition! - Larry Klayman