The Radical Left Is Bent on Silencing Us Patriots -- or Worse!
Larry Klayman asserts, 'our system of justice is irreparably compromised and corrupt' 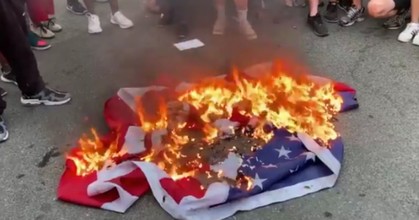 By Larry Klayman
WND
January 22, 2021
With the fraudulent election of the Chicom bought-and-paid-for criminal and Manchurian candidate Joe Biden, and his evil sidekick, Kamala Harris, as the alleged 46th president and vice president of the United States, I predicted that there would be a stepped up inquisition, if not purge, by the left of any opposition to its mission to totally enslave We the People in a socialist and increasingly communist godless state.

Sure enough, following the events of two weeks ago last Wednesday at the Capitol, following a peaceful speech by then-President Donald Trump, the FBI, an integral part and weapon of the now Biden-Harris-controlled Department of Justice, has been summoned to round up and prosecute ordinary citizens who were there that day, most of whom were obviously allowed by Capitol police to enter the building, which incidentally belongs to the citizenry in any event.

Indeed, these Americans, who had had of enough the rank and cancerous criminality in all three branches of our so-called government, had risen up and delivered a warning shot across the bow of the clowns, court jesters and criminals who pass themselves off as our elected representatives. Not coincidentally, these representatives in Congress were in the process of just rubber-stamping the fraud that resulted in the "election" of Biden and Harris, thus turning over control of all three branches of government to socialists, communists and atheists.