McConnell, Chao -- as Bad as Pelosi, Feinstein
Order "It Takes a Revolution: Forget the Scandal Industry!" at Amazon.com 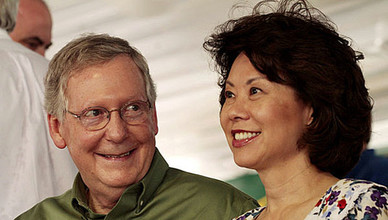 By Joseph Farah
WND
January 20, 2021
Republicans like to talk about Nancy Pelosi, Dianne Feinstein, Barbara Boxer and Eric Swalwell among other politicians cozy with Chinese Communists — especially those who will swear eight ways to Sunday that the gravest threat to the U.S. still comes from Russia.

locked down their own country while putting 20,000 on planes to the United States;