Klayman: McConnell and Fox News Turn Up Heat to Destroy Trump, His Supporters and All Conservatives: Both the Republican Party and Fox News Are Over!
Order "It Takes a Revolution: Forget the Scandal Industry!" at Amazon.com 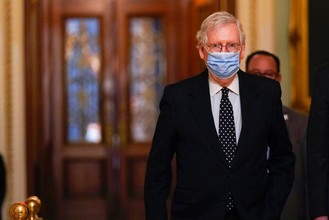 McConnell addressed the insurrection during a floor speech Tuesday afternoon and said Trump "provoked" the mob that tried to use "fear and violence" to stop the Joint Session of Congress from certifying President-elect Joe Biden's win.

"The mob was fed lies," McConnell said. "They were provoked by the president and other powerful people."

"...But we pressed on. We stood together and said an angry mob would not get veto power over the rule of law in our nation, not even for one night."