Klayman: Why Should Trump Meet With the Biggest Criminal Ever to Occupy the White House!
Order "It Takes a Revolution: Forget the Scandal Industry!" at Amazon.com 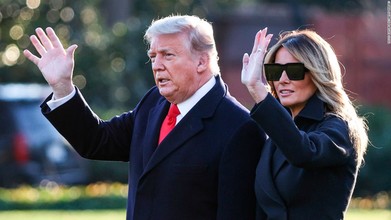 Trumps' snub of Bidens historic in its magnitude
By Kate Bennett
CNN
January 18, 2021
(CNN)On the morning of January 20, Donald Trump and Melania Trump will depart the White House as President and first lady, but they will not invite their incoming counterparts, Joe and Jill Biden, inside before they do.

The dissolving of one of America's most enduring transfer-of-power rituals -- the outgoing president welcoming the incoming president on the steps of the North Portico, and then riding with them to the United States Capitol -- is just one of the snubs the Trumps are perpetrating as they leave Washington.

Instead of a president and first lady, the Bidens will be greeted by the White House chief usher Timothy Harleth, according to a source familiar with the day's events and planning. Harleth, a 2017 Trump hire from the Trump International Hotel in Washington, will likely not stay on in the Biden administration, the source said, noting the role of chief usher in all probability will be filled by someone more familiar with the incoming president and first lady.