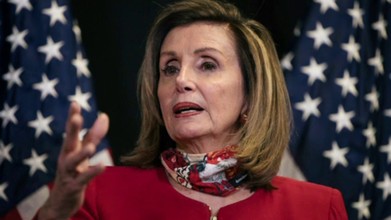 By Yael Halon
Fox News
January 17, 2021
House Speaker Nancy Pelosi appears to have changed her tune when it comes to protecting the nation's capital.

Pelosi publicly thanked National Guard troops for protecting "democracy" last Wednesday after a mob of Trump supporters stormed the U.S. Capitol to object to Congress' certification of the 2020 presidential election.

The California lawmaker told a group of guardsmen "that the Capitol, our Democracy, our Constitution are safe because of your patriotism" less than a year after she scolded President Trump for deploying troops to D.C. to quell the violent riots sparked by the death of George Floyd, a Black man who died May 25 while in the custody of Minneapolis police.