Not Just the House: From Golf Pros to the Central Park Carousel, President Donald Trump Is Rebuffed
Order "It Takes a Revolution: Forget the Scandal Industry!" at Amazon.com 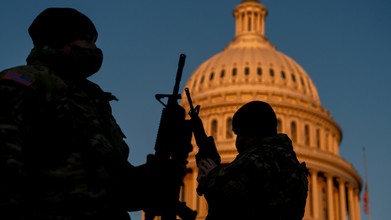 By Susan Page
USA TODAY
January 15, 2021
President Donald Trump has been impeached, and not only by the House of Representatives.

The storming of the Capitol last week by a mob egged on by the president has brought a rapid judgment not only from the lawmakers whose lives were threatened on that violent day but also from other Americans who bore witness. The nation's broader culture — from business leaders and bankers to coaches and golf pros and social media platforms — has delivered an unprecedented series of rebukes as well.

No president has ever found himself so roundly shunned and so isolated, with potential repercussions for everything from his public legacy to his earnings potential.