Klayman: It's a Gov't "Full Court Press" to Scare & Quash Conservative Dissent and Representation!
Order "It Takes a Revolution: Forget the Scandal Industry!" at Amazon.com 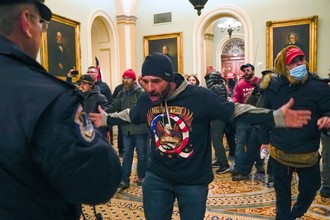 Lawmakers who conspired with Capitol attackers in legal peril
By Josh Gerstein
POLITICO
January 15, 2021
Lawmakers who interacted with the pro-Trump protesters who rioted at the Capitol last week could face criminal charges and will almost certainly come under close scrutiny in the burgeoning federal investigation into the assault, former prosecutors said.

"This is incredibly serious," said Ron Machen, a former U.S. attorney for Washington, D.C. "Although you would need compelling evidence before charging a member of Congress with anything related to the breach of the Capitol that day, this has to be investigated."

Unlike with the president, there's no Justice Department policy shielding members of Congress from legal accountability while in office.