Klayman: Time for Coach K to Be Retired: Too Big for His Diminished Britches Thanks to His Destroying Academic Integrity at Duke With Recruits Who Have No Interest in a Degree! 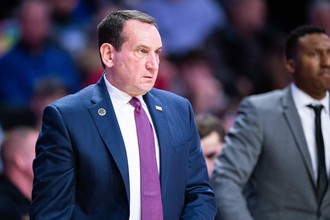 Mike Krzyzewski sounds off on 'insurrection' at Capitol: 'They need to be prosecuted'
Yahoo News
January 11, 2021
The sight of supporters of President Donald Trump storming the U.S. Capitol have sparked horror and outrage across the sports world, but it hit especially hard for a West Point graduate watching from home.

Mike Krzyzewski, speaking to the media for the first time since an exposure to COVID-19 earlier this month, launched into an extended tirade when asked about the riot at the Capitol on Saturday.

The Duke coach called for all people involved in the riot to be prosecuted, and for the politicians defending the incident to be chastised. Alternating between saddened, perplexed and outraged, he discussed Wednesday's events, the COVID-19 pandemic and current political situation.