Klayman: I Will Sue The "Communist News Network" CNN Until It Is Put Out of Business: A Vile Piece of Trash!
Go to www.FreedomWatchUSA.org to Join and Support Our Leftist Media Strike Force! Order "It Takes a Revolution!" at Amazon.com 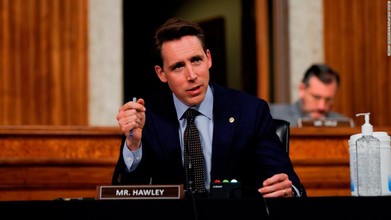 The Trump ally in the Senate leading the President's futile effort to challenge the Electoral College votes
By Devan Cole and Paul LeBlanc
CNN
January 4, 2021
Washington (CNN)Republican Sen. Josh Hawley threw a political grenade into Washington last week when he announced his intentions to object when Congress counts the Electoral College votes on Wednesday -- a move that pits the youngest senator against Senate GOP leadership as well as some rank-and-file members who will now have to cast a highly consequential vote as a result of his decision.

Hawley, 41, who was elected to represent Missouri in 2018 and is widely believed to have higher political ambitions, became the first senator to announce plans to object to the election results -- a significant development since both a House member and a senator are required to mount an objection when Congress counts the electoral votes.