Klayman: More of This on the Way Under Biden and Harris: Even Pelosi Is Not Leftist Enough!
Order "It Takes a Revolution: Forget the Scandal Industry!" at Amazon.com 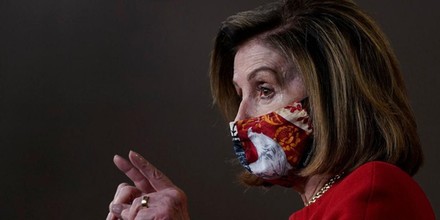 The home, reportedly owned by Pelosi, was splattered with fake blood and a severed pig's head was placed on the driveway. The white garage door was spray-painted with graffiti that read: "Cancel Rent!", "UBI!", and "We Want Everything!" There was a message of "$2K" with a line through the middle, a reference to lawmakers' failed attempts to increase the COVID-19 stimulus checks from $600 to $2,000. There was also the letter "A" inside a circle, which is the symbol of anarchists.