Klayman: Ben Ginsberg Is a Republican Establishment Lobbyist-Lawyer Hack Who Tried to Steal Freedom Watch's Trademark Years Ago!
Order "It Takes a Revolution: Forget the Scandal Industry!" at Amazon.com 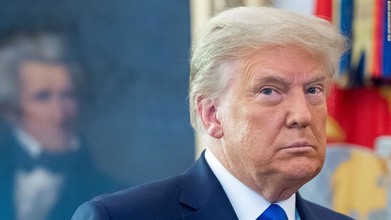 Analysis: Trump and Hawley set off Republican meltdown with Georgia elections looming
By Analysis by Gregory Krieg
CNN
January 2, 2021
(CNN)President Donald Trump is stoking division in the Republican ranks days before control of the Senate -- and the balance of power in Washington -- is decided in a pair of runoff elections in Georgia.

After more than four years of nearly unbroken fealty to the President, a heavy majority of Senate Republicans broke with Trump in a Friday vote overriding his veto of a bipartisan defense policy bill. With that loyalty test failed, Trump is also lashing out at Republicans who are refusing to get on board with a dead-end attempt to throw out the election results and erase his loss to President-elect Joe Biden when Congress counts the electoral votes next week.

Over the last 24 hours, Trump has called for a primary challenge to the second-ranking Senate Republican, South Dakota's John Thune, praised GOP Missouri Sen. Josh Hawley for his plan to join House Republican members in objecting to the Electoral College count -- a symbolic gesture that will not stop Biden from being sworn in on January 20 -- and touted a protest in Washington scheduled for the day his defeat will be ceremonially rubber-stamped by Congress.