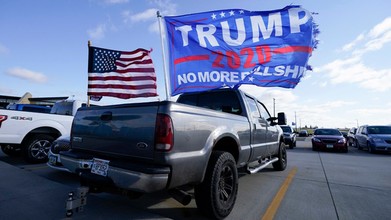 Some Trump supporters thought so Friday after the Tournament of Roses Parade — a long-standing Southern California tradition to kick off each year -- was canceled because of the coronavirus pandemic.

At least 600 vehicles participated in the event along the usual Rose Parade route. Many vehicles sported American flags from their windows or from the beds of pickup trucks — and drivers honked their horns as they traveled down Colorado Boulevard.

"Trump 2020" flags and patriotic "Don't Tread on Me" banners also were seen in videos posted on social media.