Klayman: Freedom Watch Is Organizing a Third Continental Congress This Spring in Philadelphia!
Order "It Takes a Revolution: Forget the Scandal Industry!" at Amazon.com 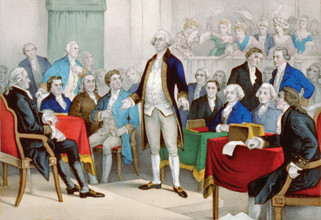 In the spring of 1774 the British Parliament's passage of the Intolerable (Coercive) Acts, including the closing of the port of Boston, provoked keen resentment in the colonies. The First Continental Congress, convened in response to the Acts by the colonial Committees of Correspondence, met in Philadelphia on September 5, 1774. Fifty-six deputies represented all the colonies except Georgia. Peyton Randolph of Virginia was unanimously elected president, thus establishing usage of that term as well as "Congress." Charles Thomson of Pennsylvania was elected secretary and served in that office during the 15-year life of the Congress.