Klayman: After Trump's Hand Picked Justices Stabbed Him in the Back VP Pence Joins the Republican Justices and Senate Traitors! Order "It Takes a Revolution!" at Amazon.com 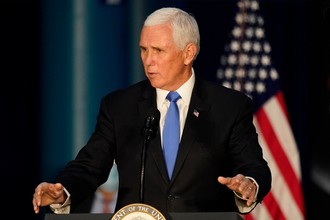 It's the first indication that Pence is resisting some of the most extreme calls to reverse the presidential election results, thus relying on his role as the presiding officer on Jan. 6, when Congress meets to finalize Biden's win.