Klayman: This Is How You Get Your Face on CNN The "Communist News Network!"
Order "It Takes a Revolution: Forget the Scandal Industry!" at Amazon.com 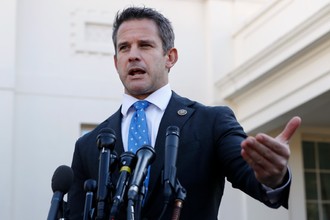 Rep. Kinzinger calls efforts to overturn election 'a scam'
By David Cohen
POLITICO
December 28, 2020
"This is a scam," said Illinois Republican Rep. Adam Kinzinger of continued efforts by President Donald Trump and some House Republicans to overturn the election of President-elect Joe Biden.

Kinzinger, speaking Sunday morning on CNN's "State of the Union," said: "The reality is there is no impetus to overthrow an election," and added that even if there were reasons to do so, there is not a constitutional mechanism to overturn a presidential election after states have formally certified their results.