Klayman: Justice Amy Comey Barrett Is a Politician in Robes Just Like Most of the Other Justices on SCOTUS! She Sold Out Trump for Her Own Standing in the Swamp!
Order "It Takes a Revolution: Forget the Scandal Industry!" at Amazon.com 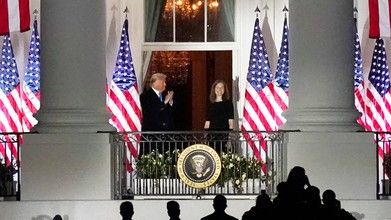 Amy Coney Barrett steers the Supreme Court to the right, but not toward President Trump
By Richard Wolf
USA TODAY
December 26, 2020
WASHINGTON — To hear Democrats tell it, President Donald Trump nominated Amy Coney Barrett to the Supreme Court this fall in order to destroy the Affordable Care Act and prevail in any lawsuits over a disputed election.

Two months into Barrett's tenure, those fears look to be unfounded. But conservatives remain hopeful she will advance the cause of religious freedom, expand Second Amendment rights and cement a conservative majority on the nation's highest court.

They have reason to be confident. As successor to the late liberal Associate Justice Ruth Bader Ginsburg, Barrett made the difference last month in a 5-4 ruling that blocked strict COVID-19 limits on religious gatherings in New York. That ruling set a precedent the court since has applied in California, New Jersey and Colorado.