Klayman: The Gov't and Boeing Are Not to Be Trusted: Don't Fly on the Dangerous Boeing 737 Max!
Order "It Takes a Revolution: Forget the Scandal Industry!" at Amazon.com 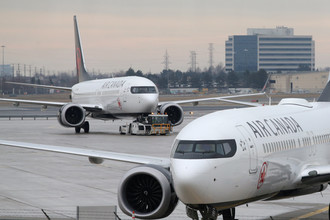 Pilots on Air Canada Flight 2358 received an engine alert shortly after takeoff from Marana, Arizona on Tuesday, the airline said. The carrier had been storing 737 Max jets there after the planes were grounded worldwide in March 2019 after two deadly crashes.

"As part of normal operating procedures in such situations, decided to shut down one engine" and diverted to Tucson, Air Canada said. The flight was carrying three crew members and no passengers. The plane remains in Tucson.

Boeing declined to comment and referred questions to the airline.