Klayman: So What WaPo!
Order "It Takes a Revolution: Forget the Scandal Industry!" at Amazon.com 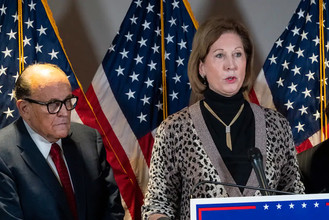 Sidney Powell's secret intelligence contractor witness is a pro-Trump podcaster
Washington Post
December 26, 2020
As she asked the U.S. Supreme Court this month to overturn President Trump's election loss, the attorney Sidney Powell cited testimony from a secret witness presented as a former intelligence contractor with insights on a foreign conspiracy to subvert democracy.

Powell told courts that the witness is an expert who could show that overseas corporations helped shift votes to President-elect Joe Biden. The witness's identity must be concealed from the public, Powell has said, to protect her "reputation, professional career and personal safety."