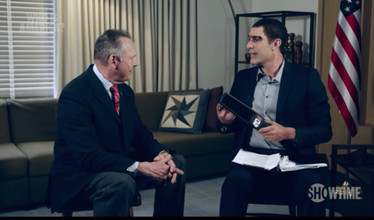 Courthouse News
December 21, 2020
Over two years after he embarrassed Roy Moore in a prank interview featuring a purported pedophile-detection wand, Sacha Baron Cohen will have to sit for an hour of questioning in the former Alabama judge's defamation case.

Moore seeks $95 million in damages after making an unwitting guest appearance on Cohen's satirical Showtime series "Who Is America?"

Donning one of his trademark disguises in the ambush, Cohen posed as a counterterrorism expert to interview Moore, the former judge who saw his 2017 Senate run derailed by sexual misconduct allegations involving underage girls.