Klayman: More Proof That My Once Proud Alma Mater Duke Is Being Harmed by the University's Leftist Hierarchy! 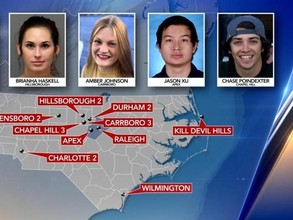 Hard drugs 'pervasive' in some fraternities; 21 charged with links to UNC, Duke, App :: WRAL.com
By Sarah Krueger
WRAL.com
December 18, 2020
Federal prosecutors and local law enforcement announced a bust Thursday of a drug trafficking ring that funneled more than a thousand pounds of marijuana, hundreds of kilograms of cocaine and other drugs throughout the campuses of the University of North Carolina at Chapel Hill, Duke University and Appalachian State University.

More than $1.5 million in drug sales were made from 2017 to 2020 by the defendants, according to court records.

Matt Martin, U.S. attorney for the middle district of North Carolina, and Orange County Sheriff Charles Blackwood expressed surprise and dismay at the amount of narcotics being moved on college campuses and the attitude of those involved.