Klayman: More Hateful BS From WaPo!
Go to www.FreedomWatchUSA.org to Join and Support Our Leftist Media Strike Force! Order "It Takes a Revolution!" at Amazon.com 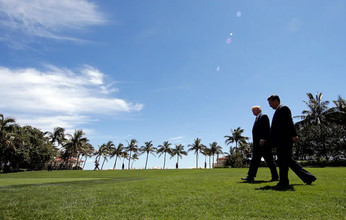 Mar-a-Lago neighbors to Trump: Spend your post-presidency elsewhere
Washington Post
December 16, 2020
Next-door neighbors of Mar-a-Lago, President Trump's private club in Palm Beach, Fla., that he has called his Winter White House, have a message for the outgoing commander in chief: We don't want you to be our neighbor.

That message was formally delivered Tuesday morning in a demand letter delivered to the town of Palm Beach and also addressed to the U.S. Secret Service asserting that Trump lost his legal right to live at Mar-a-Lago because of an agreement he signed in the early 1990s when he converted the storied estate from his private residence to a private club. The legal maneuver could, at long last, force Palm Beach to publicly address whether Trump can make Mar-a-Lago his legal residence and home, as he has been expected to do, when he becomes an ex-president after the swearing-in of Joe Biden on Jan. 20.

The contretemps sets up a potentially awkward scenario, unique in recent history, in which a former Oval Office occupant would find himself having to officially defend his choice of a place to live during his post-presidency. It also could create a legal headache for Trump because he changed his official domicile to Mar-a-Lago, leaving behind Manhattan, where he lived before being elected president and came to fame as a brash, self-promoting developer. (Trump originally tried to register to vote in Florida using the White House in Washington as his address, which is not allowed under Florida law. He later changed the registration to the Mar-a-Lago address.)