Klayman: Matthew McConaughey Can't Say It or He Will Be Hollywood Blacklisted but He Is a Conservative-Libertarian at Heart!
Order "It Takes a Revolution!" at Amazon.com 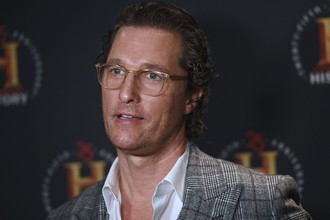 Matthew McConaughey Addresses Cancel Culture, Freedom Of Speech & "Illiberalism" In 'Good Morning Britain' Interview
Yahoo News
December 15, 2020
Matthew McConaughey has elaborated on comments he made last week about the "illiberal left" and has explained why he thinks our society's tendency to avoid true confrontation is "unconstitutional."

"We need liberals, what I don't think we need is illiberals," he told hosts Piers Morgan and Susanna Reid. "What I don't think some liberals see is they're being cannibalized by the illiberals. There are extremes on both sides that I think are unfair... the extreme left and extreme right completely illegitimize the other side. They exaggerate the other side's stance into an irrational state that makes no sense. That's not fair."