Declaration of Independence
Order "It Takes a Revolution!" at Amazon.com 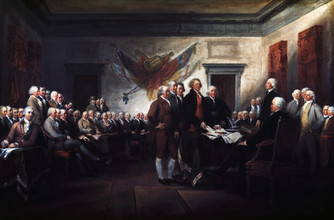 HISTORY
December 14, 2020
The Declaration of Independence was the first formal statement by a nation's people asserting their right to choose their own government.

When armed conflict between bands of American colonists and British soldiers began in April 1775, the Americans were ostensibly fighting only for their rights as subjects of the British crown. By the following summer, with the Revolutionary War in full swing, the movement for independence from Britain had grown, and delegates of the Continental Congress were faced with a vote on the issue. In mid-June 1776, a five-man committee including Thomas Jefferson, John Adams and Benjamin Franklin was tasked with drafting a formal statement of the colonies' intentions. The Congress formally adopted the Declaration of Independence—written largely by Jefferson—in Philadelphia on July 4, a date now celebrated as the birth of American independence.