Klayman: Trump Should Find the Courage to Declare Martial Law and Set up New Elections! But Trump Won't Because He Fears the Leftist Deep State and the Incoming Biden Justice Dept.!
Order "It Takes a Revolution!" at Amazon.com 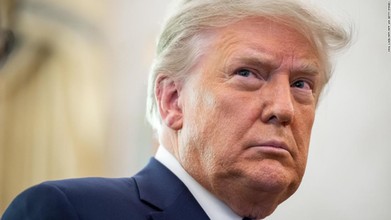 Analysis: Trump schemes next political moves after effort to overthrow democracy dead ends at Supreme Court
By Analysis by Maeve Reston
CNN
December 12, 2020
(CNN)President Donald Trump's effort to unravel democracy hit a dead end at the Supreme Court Friday night, capping five weeks in which he dragged the country along on his narcissistic quest to stay in power after President-elect Joe Biden overwhelmingly won the election.

In the end, the guardrails of democracy stayed in place. Trump lost -- for the second time at the Supreme Court this week. But instead of helping the effort to curb a deadly pandemic that has claimed nearly 300,000 American lives by easing the transition for his successor, he is already scheming about his next political moves. Before the high court rejected his bid Friday, his campaign announced a cable ad buy to further his fraudulent claims about the election, and he clearly intends to try and meddle in Congress' counting of the Electoral College results in January.

More broadly, the damage he has done to Americans' faith and trust in democratic institutions will last long after he packs his bags and ends what will go down as one of the worst presidencies in history.