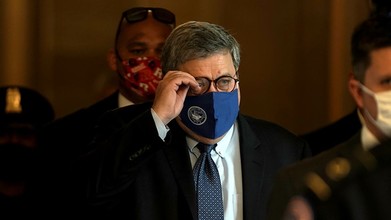 A person familiar with the matter told the newspaper that Barr has avoided providing information on the probes to congressional Republicans, but did not offer further details.

The report comes the same week that Hunter Biden announced that the U.S. Attorney's office in Delaware is investigating his tax affairs. The former vice president's son said that the was informed of the probes when his lawyer was advised of the investigation by federal prosecutors.