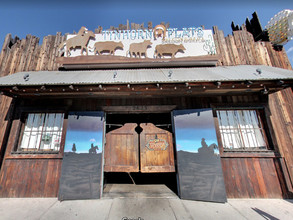 By Farley Elliott
Eater LA
December 10, 2020
Burbank restaurant Tinhorn Flats is reopening today at noon, calling its return of outdoor on-site dining a "peaceful protest" on social media. Fans have been pledging to show up to support them for days, calling for an end to "tyrannical mandates and closures" as a result of the ongoing coronavirus pandemic.

Reached by phone earlier this week, owner Baret Lepejian says that he runs the nearly two-decade-old Burbank location with just himself and two children, and that he plans to continue serving customers outside daily from noon to 9 p.m. for the foreseeable future. "I'm going to lose my business anyway," Lepejian said, "So fuck it." When asked about possible repercussions, including the loss of his operating license, Lepejian said that he would continue to cook and serve until someone physically removed him from the property. He has spoken with Burbank Police, he added, saying that they do not plan to get involved with his removal.