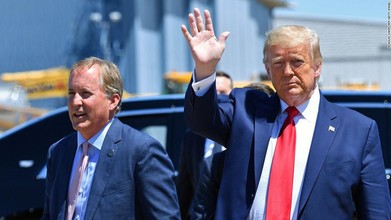 Explaining the Supreme Court lawsuit from Texas and Trump
By Ariane de Vogue and Dan Berman
CNN
December 10, 2020
(CNN)Although all 50 states have certified their election results and the Supreme Court swiftly rejected an emergency request from Pennsylvania Republicans to block election results in the commonwealth, the justices are now grappling with a new controversial bid from Texas, supported by President Donald Trump and 17 other Republican-led states.

They are asking the Supreme Court for an emergency order to invalidate the ballots of millions of voters in four battleground states -- Georgia, Wisconsin, Michigan and Pennsylvania -- even though there is no evidence of widespread fraud.

Critics of the President and his allies say the case reflects an audacious and legally dubious gambit to keep the lawsuits flowing in order to prolong baseless claims that President-elect Joe Biden's victory was somehow illegitimate.