Klayman: Time to Put Coach K Out to Pasture: First He Damaged the Academic Integrity of Duke With "One and Done" and Now He Is Also a Loser With His "Pro Team!" 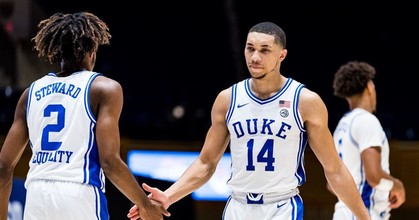 Coach K, Matthew Hurt and Jeremy Roach talk loss to Illinois
By Adam Rowe
The Devils Den
December 10, 2020
Duke dropped its second loss to a Top 10 foe last night, when the Blue Devils fell 83-68 to #6-ranked Illinois in a game that was probably closer than the final score indicated. Throughout the span of 40 minutes, Duke never led, as they scored just two points over the game's first 4:94 of play. Coach K, Matthew Hurt and Jeremy Roach met with the media after the game to try and provide answers as to why the team looked so listless and unable to generate points for the fourth consecutive game.

Happy Wednesday. Hopefully Wednesday is better than Tuesday. We got beat by a team that is better than we are, and older, more mature. They kind of imposed their will on us. We are not as good as they are. Therefore, you have to be really smart and hit shots. We are not there yet. We have a lot to learn. I think we're playing hard on the defensive end. We did some things defensively to put us in a position to put some game pressure on them but they always answered. They're good. Brad [Underwood] does a great job with his team. They have a lot of weapons. They're older, they're a good team. They were last year and they are right now. We are just an average team that is very young and has to get better.