Klayman: Pres. Trump Do Not Trust Newsmax: When Convenient Newsmax Will Betray You as Its CEO Chris Ruddy Gave Clinton Foundation $1 Million USD!
Order "It Takes a Revolution!" at Amazon.com 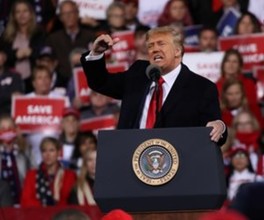 "I'll tell ya, we have some great new people," Trump told the large and boisterous Valdosta, Georgia, crowd, "Newsmax."

The rally cheered loudly when Trump called out the "fake news."

"That's a big group of people back there," Trump said. "That is a lot of fake news. But now we call it the fake news and the suppression news. I use the word suppression.