Klayman: Typical Charges by Leftist So Called Legal Ethics Experts: The Left Is on a Jihad to Eliminate Conservative Pro-Trump Lawyers From the Practice of Law! Order "It Takes a Revolution!" at Amazon.com 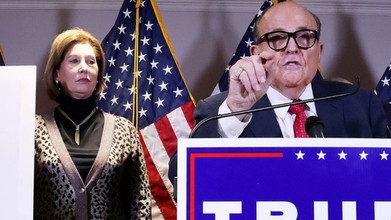 As lawyers keep pushing Trump election challenges, calls for sanctions mount
ABC News
December 5, 2020
As President Donald Trump and his allies continue their legal barrage in an effort to overturn the presidential election despite a succession of adverse rulings, some state and local election officials are starting to cry foul.

In Michigan Thursday, Republican lawyers were back in court seeking an audit of election results in the heavily-Democratic county that is home to Detroit -- even after the state's Supreme Court had already rejected an earlier request from the same group to halt certification. An exasperated lawyer for the city pleaded with the judge to do something.

"They are trying to use this court in a very, very improper way," said Detroit city attorney David Fink. "We ask this court not just to deny the relief that is requested but to grant significant sanctions, because this has to stop."