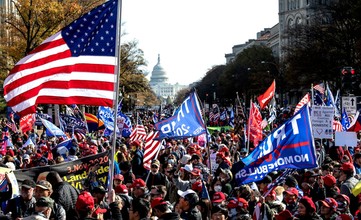 After thousands of Trump supporters rally in D.C., violence erupts when night falls
Washington Post
November 14, 2020
President Trump's supporters had celebrated for hours on Saturday, waving their MAGA flags and blaring "God Bless the U.S.A." as they gathered in Washington to falsely claim that the election had been stolen from the man they adore. The crowd had even reveled in a personal visit from Trump, who passed by in his motorcade, smiling and waving.

But that was before the people who oppose their hero showed up and the mood shifted, growing angrier as 300 or so counterprotesters delivered a message the president's most ardent backers were unwilling to hear: The election is over. Trump lost.