Klayman: Here We Go With Left's Hold on Braindead Biden!
Go to www.FreedomWatchUSA.org and Support Our Citizens Grand Juries and Join Our Justice League! 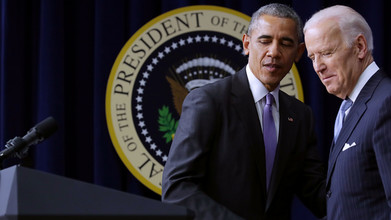 Obama White House Veterans Urge Biden To Embrace Executive Action
NPR.org
November 14, 2020
President-elect Joe Biden won the presidency in large part because he promised to be the anti-Trump on policy, temperament, tone and just about everything else. But two men who helped run the Obama White House are urging him to follow President Trump's example in a specific way: by unapologetically leaning on executive actions to implement key policies.

The advice from former Obama chiefs of staff Rahm Emanuel and Denis McDonough comes as Biden prepares to enter office with an agenda potentially stalled by a closely divided Congress — a much smaller House majority than expected and a 50-50 Senate, at best.