Klayman: More Cowardly Deceit in the Legal Profession!
Go to www.FreedomWatchUSA.org and Support Our Citizens Grand Juries and Join Our Justice League! 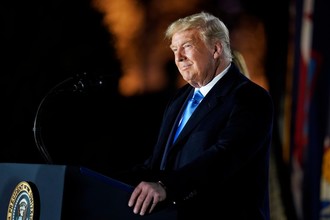 Another law firm bails out on Trump campaign
By Josh Gerstein
POLITICO
November 13, 2020
Another law firm has moved to drop its representation of President Donald Trump's campaign in its flurry of lawsuits challenging the results of last week's presidential election.

Late Thursday night, Columbus-based firm Porter Wright Morris & Arthur notified a federal judge hearing a Trump-filed suit over the election tallies in Pennsylvania that the firm is seeking to pull out of the case.

The development comes as Trump's political opponents have sought to put public pressure on law firms assisting what many legal experts view as a meritless and likely fruitless campaign to try to thwart President-elect Joe Biden from taking office despite the fact that major media outlets have declared Biden the victor and the near-final counts showing Biden thousands of votes ahead in the key battleground states.