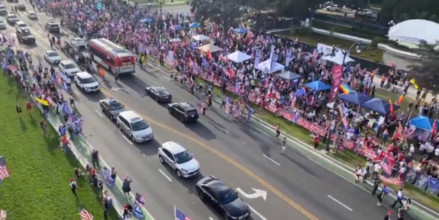 TheBlaze
November 1, 2020
In the 2016 presidential election, Hillary Clinton expectedly and handily beat Donald Trump in the overwhelmingly blue Los Angeles County by a margin of 2,464,364 to 769,743. Beverly Hills, which is in the Democratic stronghold of Los Angeles County, has seen several well-attended pro-Trump rallies this election season. On Saturday, the last pro-Trump rally in Beverly Hills before the 2020 presidential election occurred, but it was marred by violence after counterprotesters stoked tensions.

A large group of pro-Trump supporters gathered in Beverly Hills for a festive "USA Freedom Rally" on Saturday afternoon. Later in the day, the rally morphed into a MAGA parade with supporters chanting: "U-S-A! U-S-A!"

On the ground at the final Beverly Hills Freedom Rally before the election. While it was scheduled to start at 3, p... https://t.co/rIdZtSss0Z — Samuel Braslow (@Samuel Braslow)1604177577.0