Klayman: Low Class Communist Trash From the Left! Order It Takes a Revolution at Amazon.com 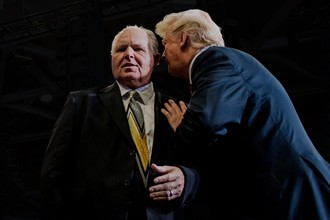 Rush Limbaugh's Fight to the Death
By Justin Peters
Slate Magazine
October 31, 2020
On Sept. 29, the day of the first presidential debate between Donald Trump and Joe Biden, Rush Limbaugh had a shocking story to share on his daily radio show. First he read the headline: "Biden's Texas Political Director Implicated in Massive Mail-In Ballot Harvesting Scheme in Harris County." To hear him tell it, the story was yet another blockbuster that the pro-Biden media was suppressing. "Now these are explosive charges in this story ... and it's the seriousness of the charge that matters," Limbaugh told his listeners. "A Biden campaign operative in Texas is attempting to rig the 2020 election with the help of others and a massive ballot-harvesting scheme, according to two private investigators who testified under oath that they have video evidence, documentation, and witnesses to prove it. With the help of mass mail-in ballots, the illegal ballot harvesting operation could harvest 700,000 ballots."